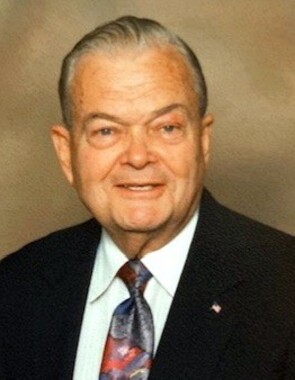 Back to Sidney's story

Sidney Guy Abernathy, age 90, of Dalton, passed away peacefully in his home at Royal Oaks Monday, January 6th, just one week shy of his 91st birthday.
Sid was born in Columbia, Tennessee and was preceded in death by his father Sidney Guy Abernathy Sr., mother Esther Jackson Abernathy, brother William Abernathy, sister Evelyn Campbell and nephews Colin, George, Donnie and David Campbell.
He is survived by Virginia Hancock Abernathy, his wife of over 63 years, and his 4 children - Guy and Julie Abernathy, Mel and Gretchen Abernathy, Louanne and Gene Crosby and Lee and Stephen Furman. He is also survived by grandchildren Fran and Trent Bagley, AnnaLee and Jon Paul Montante, Guy David Abernathy, Eric Abernathy, Scott Abernathy, Caroline Crosby, Hannah Crosby, Kat Furman and Beth Furman and by great-grandchildren Britton Bagley, Bryce Bagley and CharLee Montante. Sid is also survived by several nieces and nephews.
Sid graduated from the University of Tennessee with a Bachelor's degree in Industrial Engineering and later earned a Masters Degree from the University of Tennessee at Chattanooga. He graduated 5th in his class in Officer's Candidate School and served as a Second Lieutenant in the Korean War.
After the war Sid worked at Oak Ridge and then for Shell Oil. He served as a Scout Master for the Boy Scouts of America while living in Atlanta. He married Virginia in 1957, and in 1960 moved to Dalton, Ga. Sid was employed at Southern Wholesalers and later accepted a position at Southern Binders. He was promoted to president of Southern Binders and worked there for 25 years. Sid acquired his real estate license and worked for Belk Realty before his final retirement.
He was an active member in the Dalton community for 60 years and was very involved with the Dalton First United Methodist Church, where he served a term as president of his Sunday School class and taught Children's Sunday School for a time. He was also a member of the Sounds of Joy choir.
Sid was active with the American Heart Association, Civitan Club, the American Cancer Association, the Alzheimer's Foundation, Habitat for Humanity and was a member of the Rotary Club for many years. Sid also volunteered with the Dalton High school Catamount Band club as well as the PTA.
Sid loved music and could play the piano by ear. He also loved to travel. He enjoyed working in his garden, playing golf, camping, sailing and spending time with family whether at home, the lake or the beach.
A Celebration of Life service will be held at Dalton First United Methodist Church on Saturday, January 18th with visitation beginning at 1:30 in the Atrium followed by the service in the sanctuary at 3:00. Rev. Terry Fleming will lead the service.
In lieu of flowers, memorials may be sent to Dalton First United Methodist Church, music and worship fund, 500 N. Thornton Ave. Dalton, GA 30720.
Condolences may be sent to the family in care of Love Funeral Home.
Published on January 15, 2020
To send flowers to the family of Sidney Guy Abernathy, please visit Tribute Store.

Send flowers
in memory of Sidney

A place to share condolences and memories.
The guestbook expires on July 09, 2020.

Denise Parker Edwards
My condolences to the entire Abernathy family. What a wonderful and full life packed with sweet memories for you all. You will miss him every day, but he will live on in each of your hearts. My prayers are with you during this difficult time.
WILEY ADKINS
So sorry to hear of Sid's passing. He was a wonderful guy and friend.
John Grisson
My condolences to the Abernathy family. I appreciate all of the care and concern your family gave to me and my mother Hattie Grissom during her time on earth. You and your family was a blessing to us. May he rest in peace.
Kim Gaster
Louanne, I know how much you and your precious family will miss your dad. May God comfort you and bring you lots of sweet memories. Love you - Kim, Jim, Lainey and Liza
View all